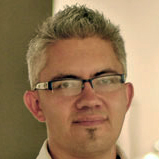 The hard-working Sergio Gomez talks about the continuity of identity across art world practices and the importance of allocating time according to personal interest, not expectations or guilt.

“I always was intrigued by this idea of, ‘What really is a full-time artist?’ I started to find this idea that a full-time artist is one who’s always in the studio. And I said, ‘Why?’ Art is not something where you’re going to check-in at 8 and leave at 5. That’s not how art functions—at least not in my experience.”

Sergio Gomez is a Chicago-based artist, curator, gallery director, educator, and arts advocate. Born in Mexico, Gomez moved to Chicagoland at the age of sixteen with his family. He studied art in high school and took classes at the School of the Art Institute before graduating from Governors State University with a Bachelor of Arts. Gomez began working as a graphic designer, eventually putting himself through Northern Illinois University for an MFA. After graduating, Gomez founded the co-operative 33 Collective Gallery with several other NIU graduates inside Zhou B Art Center’s warehouse space in Chicago’s Bridgeport neighborhood. Eventually the artists involved closed the co-operative and in 2004 Gomez established his own gallery, 33 Contemporary, an 800 square foot space currently serving approximately 28 artists. Five year later Gomez took an additional position as Zhou B’s Director of Exhibitions, working with two galleries of 10,000 and 15,000 square feet respectively. That year Gomez also began teaching art and design at South Suburban College, and he founded the curated online exhibition space VisualArtToday.com. With his wife he opened 3c Wear, a initiative that creates T-shirts using the original prints of artists and helps fund local educational efforts. Gomez’s own artwork has been shown nationally and internationally in a number of group and solo shows, and sits in such collections as the National Museum of Mexican Art, the Breuer Art Museum, and the MIIT Museum Internazionale Italia Arte, among others. Gomez has curated a number of well-received exhibitions, including “Chicago’s Twelve” and “The National Self-Portrait Exhibtion”, and he has established curatorial collaborations in Italy, Austria, Mexico, Spain, Chile, and China.